Is My Brunswick-Balke-Collender Co. Table a Billiard Table or Pool Table? 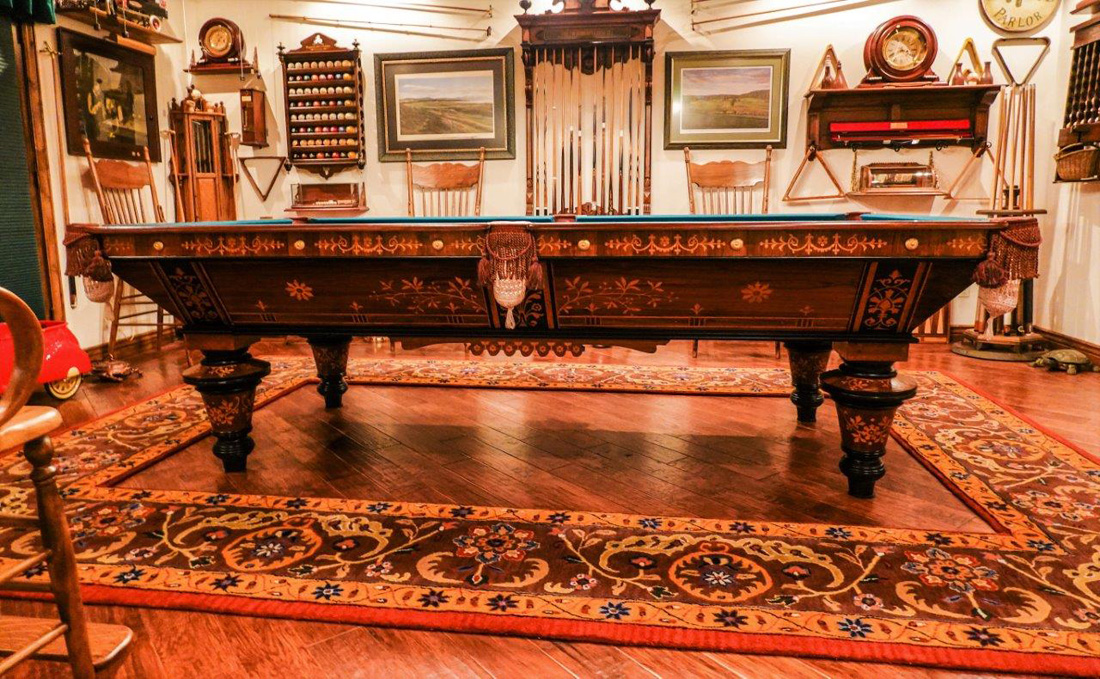 I must admit that for many years I have been of a mindset that a "BILLIARD" table had no pockets and a "POOL" table had pockets. This is an understandable bit of confusion for one growing up in America in the 1940's and 50's and going into Kenny's Barber (Pool) shop in Brighton, Iowa where there were three tables with pockets in a smoke filled back room. Although everyone called them pool tables, were they billiard tables or pool tables??? 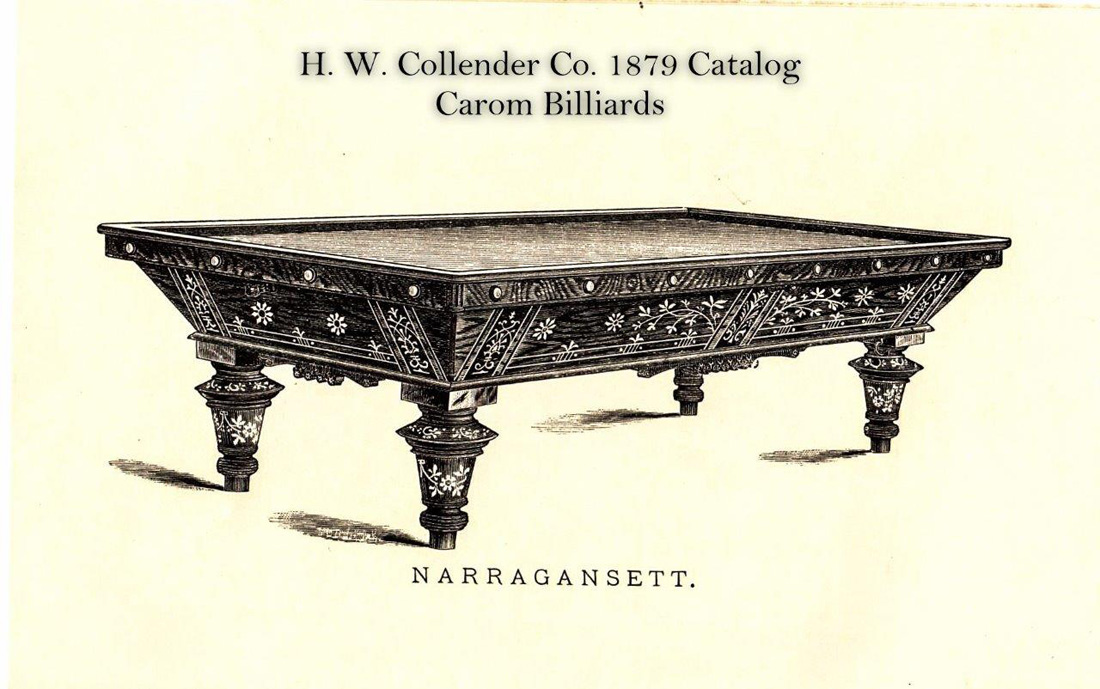 The confusion between the terms billiards and pool go back early in time and were made even more confusing by companies like the Brunswick-Balke-Collender Company at the turn of the twentieth century.

The consensus is that the word billiards is derived from the French word "Bille" which means ball and/or from "Bilart" meaning a stick. Most agree that the game of billiards evolved from a lawn game played in the heat of the summer to a table game that could be played during inclement winter weather in Europe. European literary works that look back at the history of the game always refer to the many different table games as billiards. The only reference to pool in European billiards is the game of "Life Pool" where spectators as well as the players could pool their money and bet on the outcome of a specific game of billiards.

The word pool comes from the French word "Poule" meaning a collective stake. Nineteenth century horse racing in Europe included an auction process of "pooling" bets of the many people wagering in the outcome of a horse race. This betting was done at posts around the grounds where individuals would set odds for the horses and collect bets. You could move from one post to another until you found the odds you wanted. I witnessed this first hand on a Sunday at the very proper (large hats, white suits and tea) Ngong Racecourse in Nairobi, Kenya in 1979.

Betting at Ngong Racecourse was done through a totalizator pool betting system. Daily betting is available at the Racecourse for both football and horse racing through Phumelela Gaming and Leisure, the largest provider of betting in South Africa, allowing all bettors at different locations to access the same betting pool. The minimum bet on the Tote System is 1 US Dollar but the system can take bets of any higher amount that the punter may wish to make.

Many literary writers on the subject believe that the term "pool" rather than "billiard" when referring to the table game is in large part an American slang word closely related to horse racing in America. 1800's horse racing in the United States involved betting on the horses as it did in Europe. However rather than betting at a post at the track, betting was done in what was called a "pool room" at or near the track where the bets could be collected and the odds set. Needless to say there was down time between horse races and thus the pool room operators (bookmakers) added billiard tables and served alcohol to the patrons to keep them in the room so they could lose even more of their money on the horses. So, you see the term "pool room" referring to a betting parlor at a horse track preceded the term "pool room" referring to an establishment for the table game of billiards. Over time the slang term for the table became a "pool table" rather than "billiard table" much the same as the establishment was called a "pool room" rather than a horse track bookmaker's room.

What is still a bit unclear to me is how the term pool became synonyms with a billiard table with pockets. I expect it is because the popular American games at the time were pyramid pool and 15 ball pool which are played on a table with pockets. In the U.S. this terminology was reinforced by the leading manufacturers of billiard tables during the 1870s and 80s like Brunswick-Balke and H.W. Collender. The 1908 Brunswick catalog cover shown below is titled "Billiard and Pool Tables". Brunswick is making a clear distinction between a billiard table and a pool table. 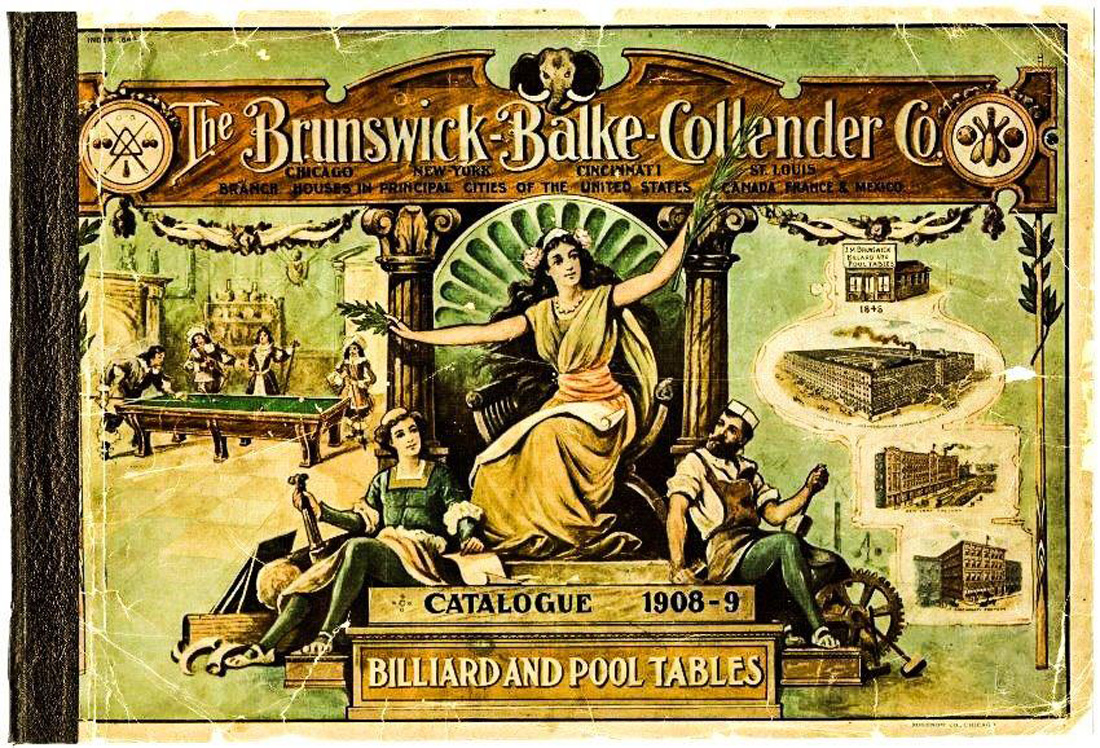 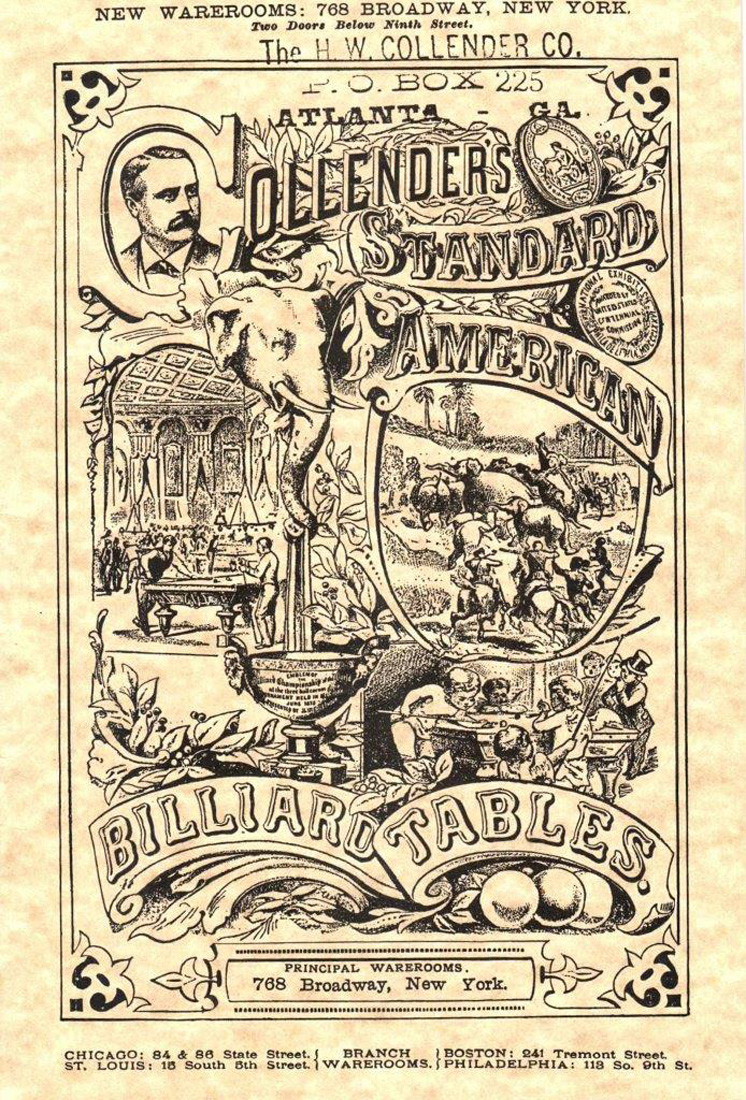 If you open this 1879 H. W. Collender Catalog up to page 4 (shown below) you find a Narragansett table with no pockets. 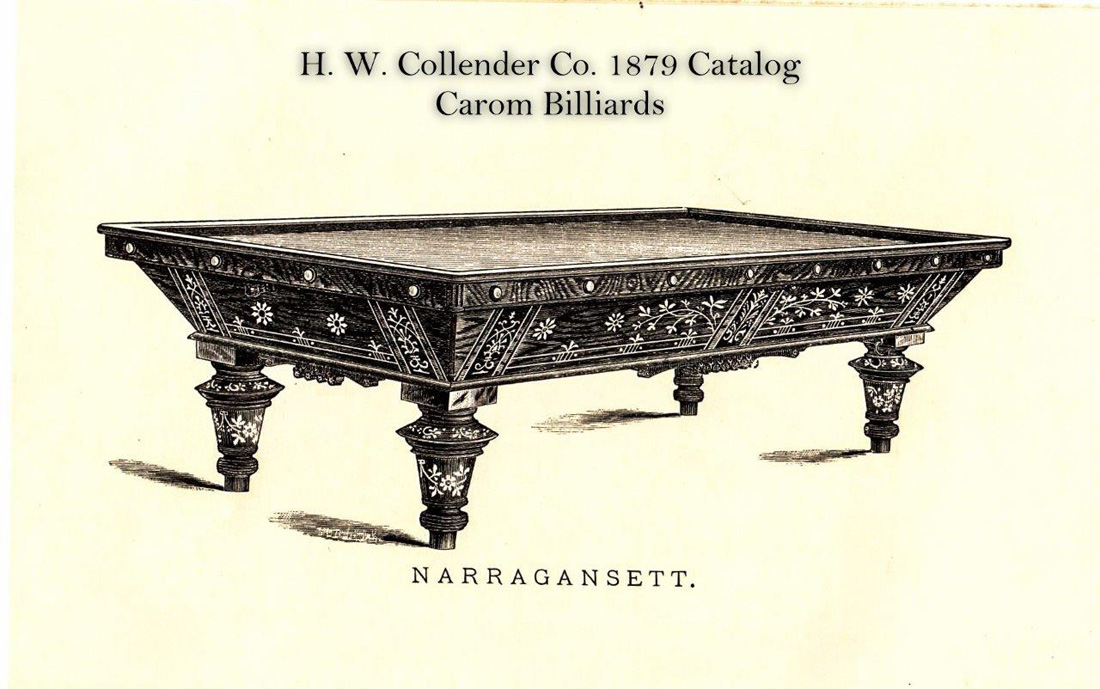 The next page describes the options for this table. 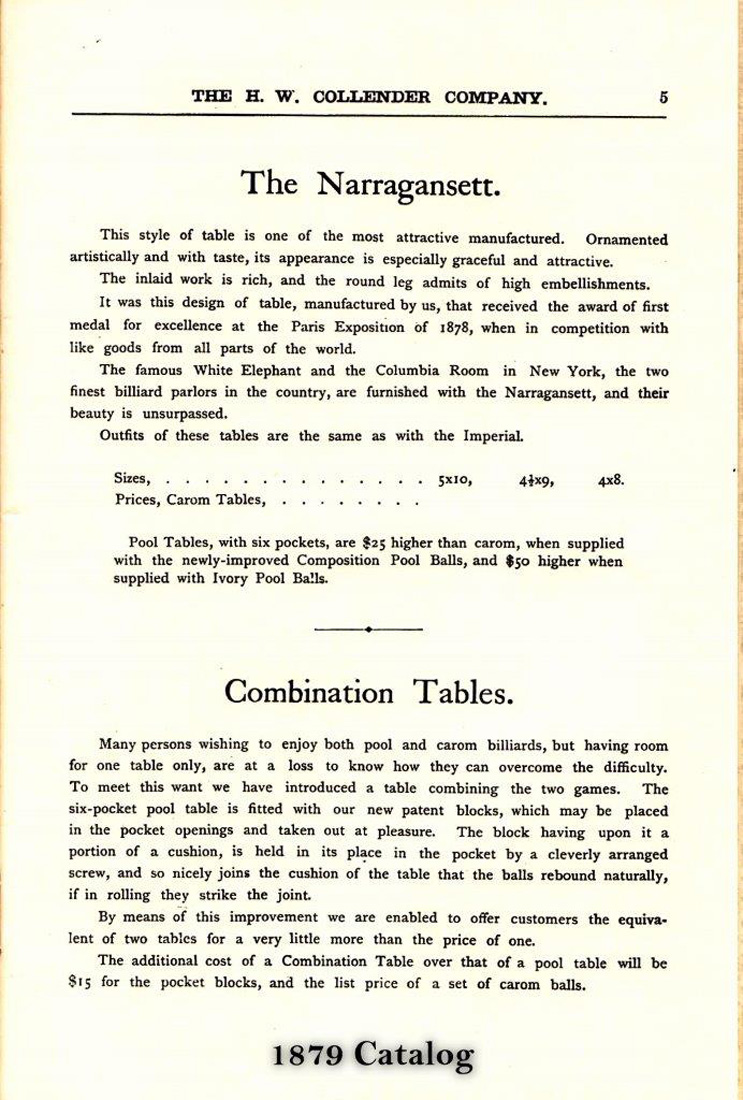 Notice the first sentence under “Combination Tables”, “Many persons wishing to enjoy both pool and carom billiards”. H. W. Collender is making a distinction between a pool table, a table with pockets, and a carom billiards table (seen above), one without pockets. Later in the catalog seen below they show this same table as a pool table. So, there you have it. Both Brunswick-Balke-Collender and H. W. Collender make the same distinction. In the 1800s and early in the 1900s, a table with no pockets is a billiard (carom) table and a table with pockets is a pool table. 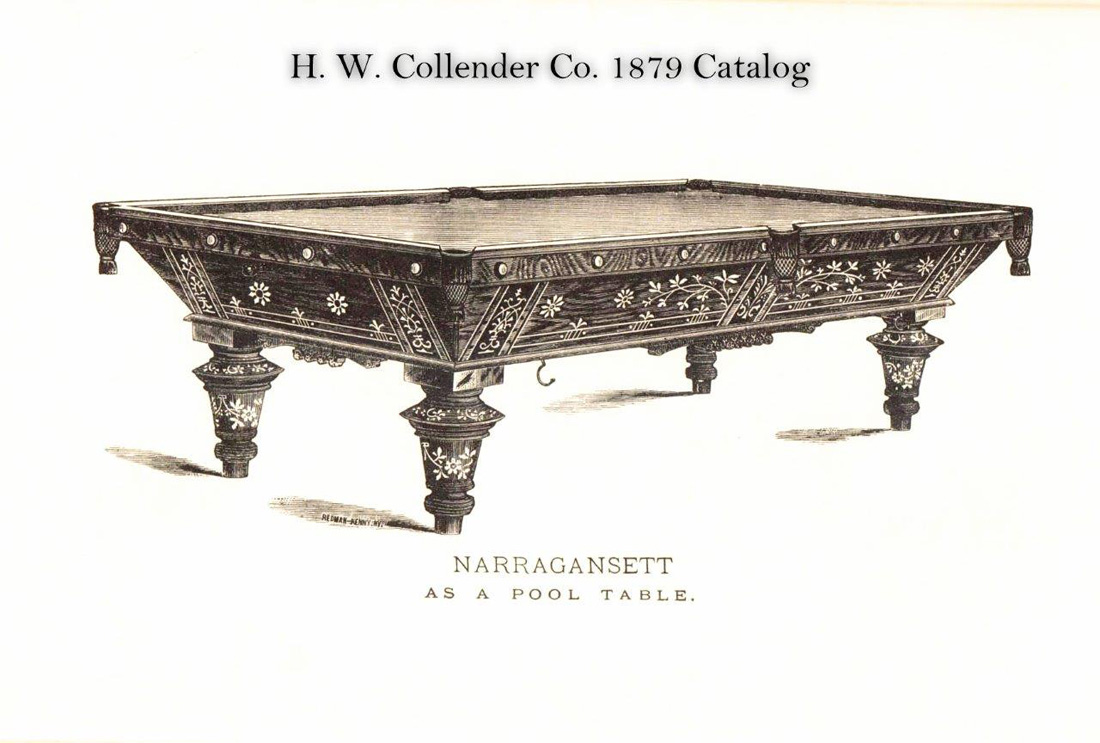 After the turn of the twentieth century in the United States there began an evolutionary period where Brunswick-Balke-Collender Co. wanted to clean up its reputation as a country of men hanging out in saloons. We no longer wanted our European neighbors to think of the U.S. as embracing places where drinking, prostitution and the wild west was the norm. There was a significant back lash against men hanging out in saloons and all that it entailed, including playing pool. Perhaps you will remember the 1962 musical movie "The Music Man". Hanging out in a "POOL ROOM" was not a good way to influence or bring up the younger generation.

Sensing this new morality, Brunswick-Balke-Collender published the Brunswick catalog March of 1914 with the title that read, "Carom and Pocket Billiard Table and Supplies" 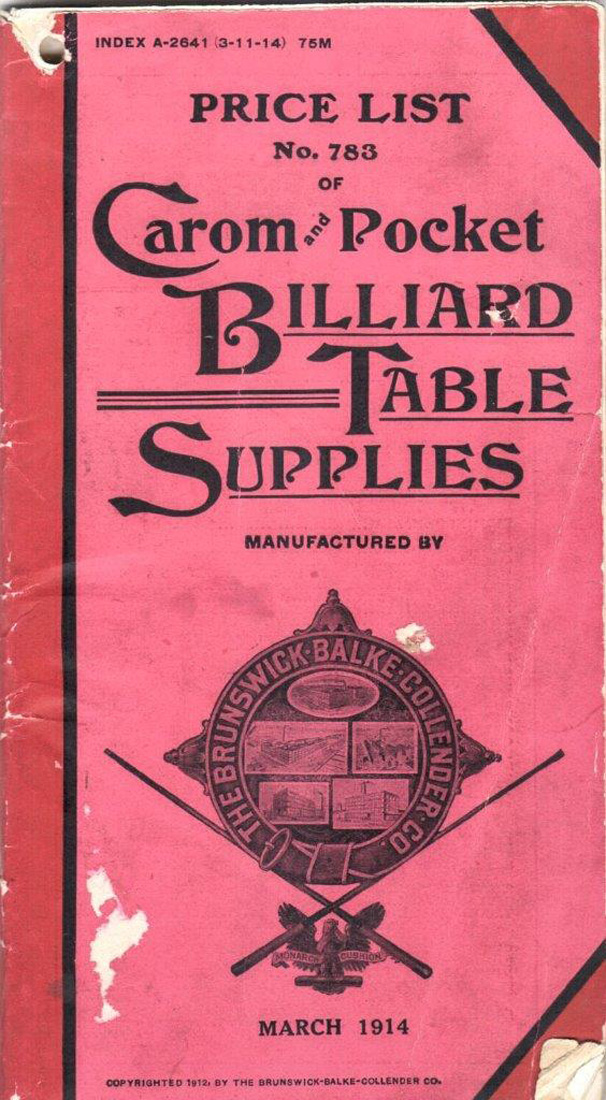 On the inside cover there is a Brunswick editorial (shown below) encouraging billiard room operators to use the term billiard rather than pool. It states, “POOL IS A MISNOMER” I am hoping you can read this page of the 1914 catalog seen below on your screen. Just like in the 1962 film “A Music Man” going into a POOL HALL was shameful and a disgrace. 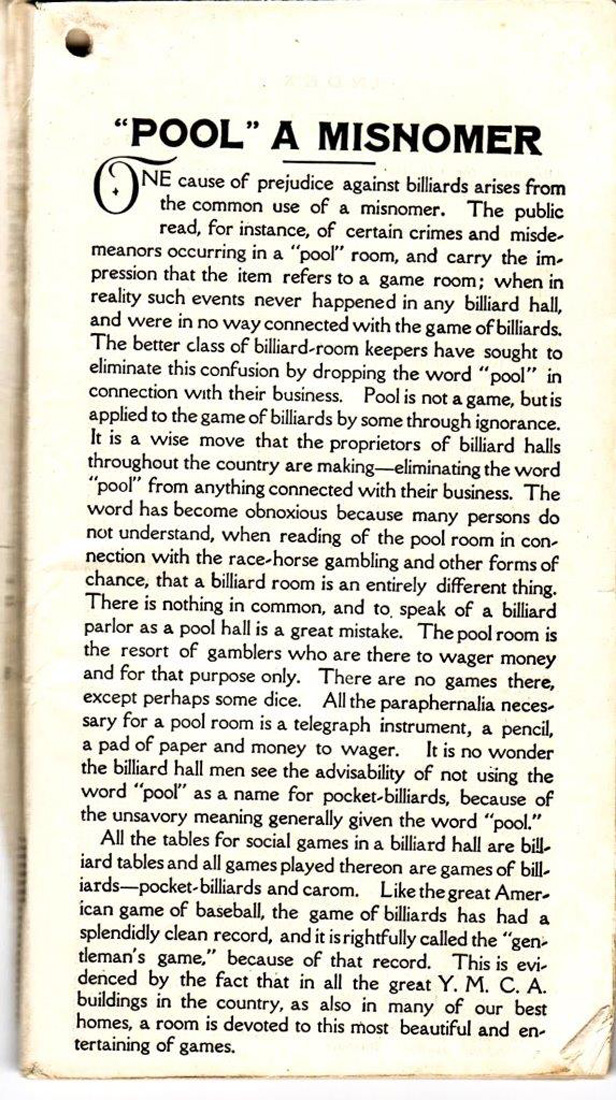 And so, for Brunswick, the term "pool" was out and it was being replaced by "pocket billiards".

Look at the inside first page of the following years 1915 catalog. 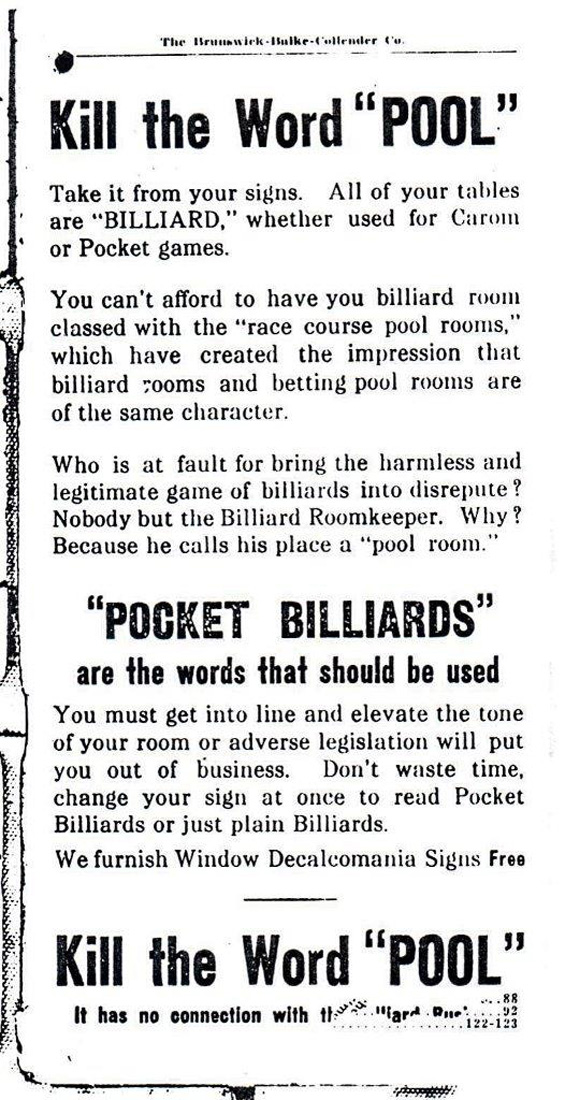 In that same 1915 catalog, Brunswick in an advertisement (see below). was giving away pictures of glamorous women playing pool. These were prints Brunswick-Balke-Collender Co. commissioned by artist Archie Dunn. I like the line, “This Attractive Elector-type of a Lady Billiardist will set you free!” Have you ever heard the term Billiardist?? Certainly, the phrase, “will set you free” has sextual connotations. Pretty risqué for 1910 don’t you think? 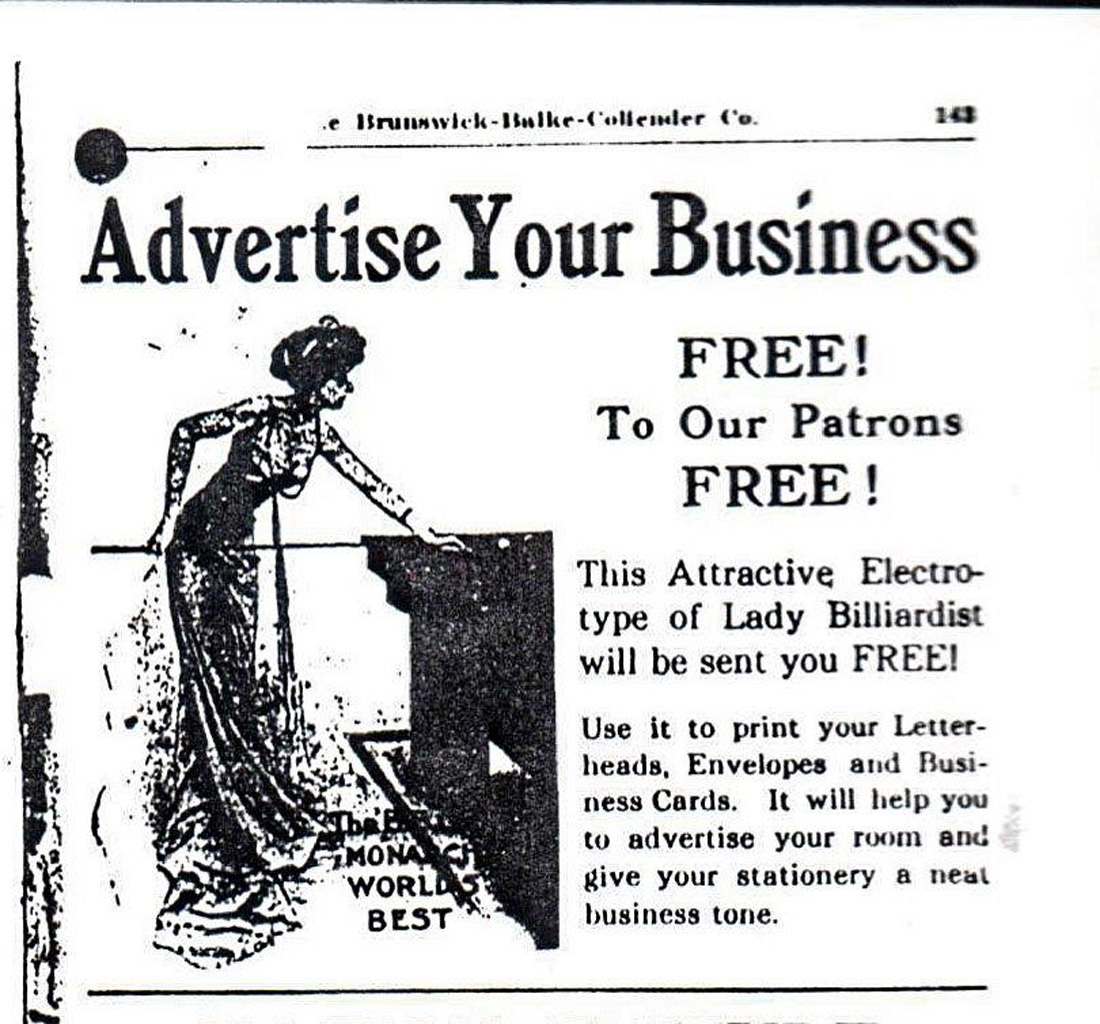 I have two of the original Archie Gunn Lady Billiardist prints that Brunswick-Balke-Collender Co. commissioned in 1910 as seen below in my billiard room. 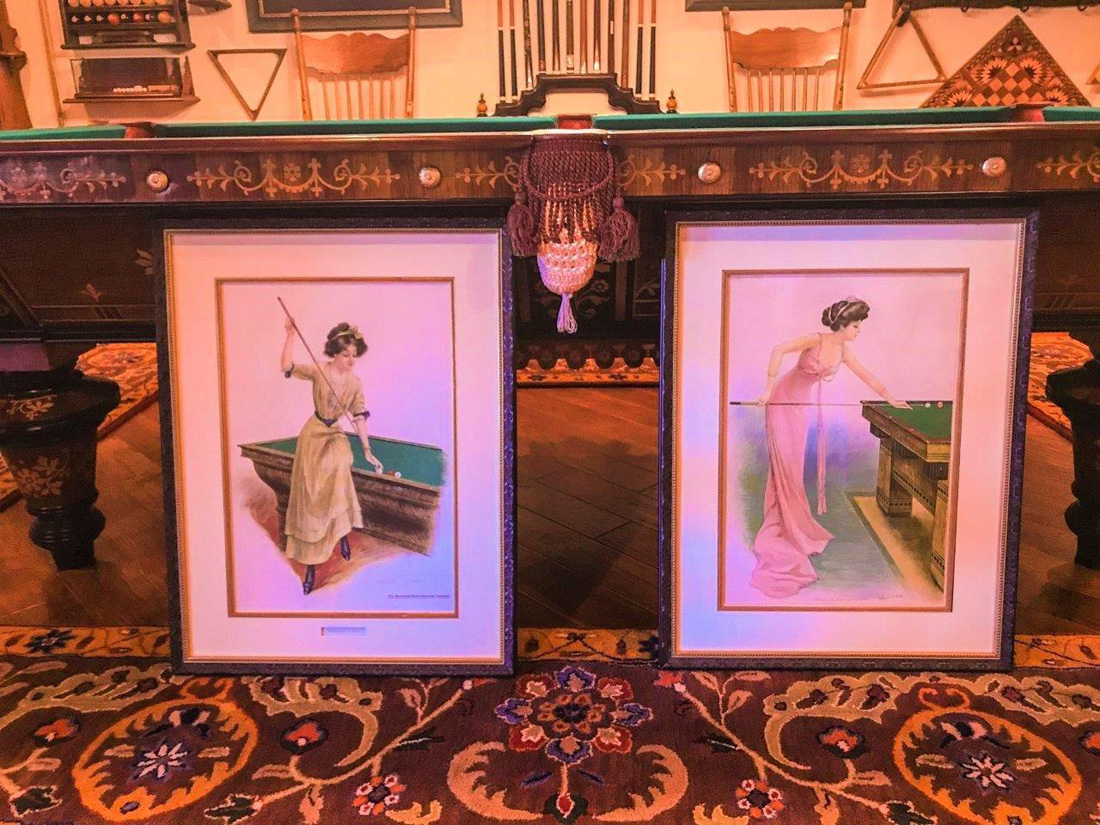 For many years I have been looking for the third glamorous Archie Gunn Lady Billiardist print (shown below). It is call “A Graceful Stroke”. If anyone has this print or knows the whereabouts of one of these original prints please contact me. 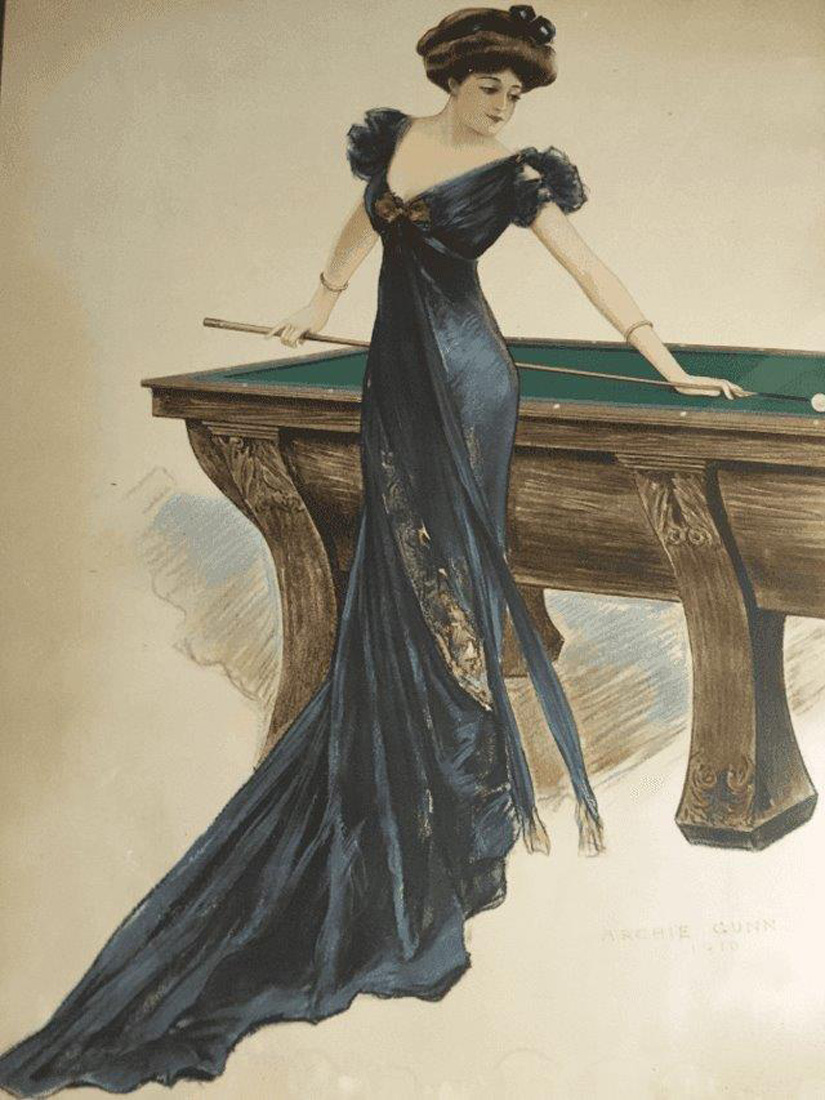 In other ads by Brunswick and others, there was a flourish of pictures of families and women playing pool. They were trying hard to dispel the image of an establishment that catered to men hanging out where drinking and betting were the norm. For example, look at this C. Everett Johnson original water color below. It was commissioned by Brunswick-Balke-Collender Co. in 1910. This art work is promoting playing billiards at home and not in some bar with a bunch of men drinking and carrying on. 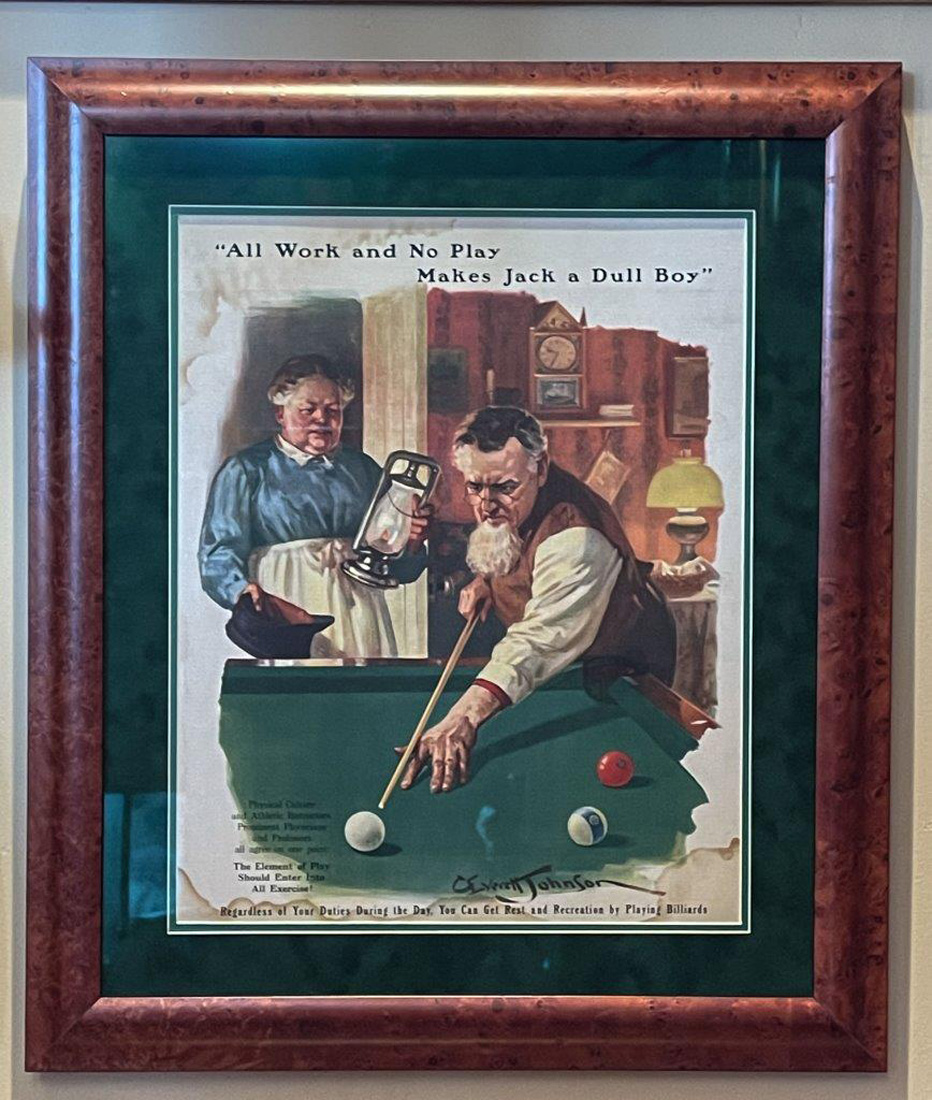 Below is the front and back cover of the 1923/24 Brunswick-Balke-Collender Co. Catalog. Notice on the from it says Billiard table and not pool table. The catalog has about 50 pages. Not once in this catalog is there a reference to “Pool”. All table are either referred to as carom billiard (no pockets) or pocket billiard tables. Cues are referred to as “Brunswick cues” and not “pool cues”. Also notice on the back of the catalog, Brunswick is still promoting Billiards as a glamorous game where ladies of the 1920s came out to billiard parlors for a game. “For shame”, if you should say pool hall rather than billiard parlor. 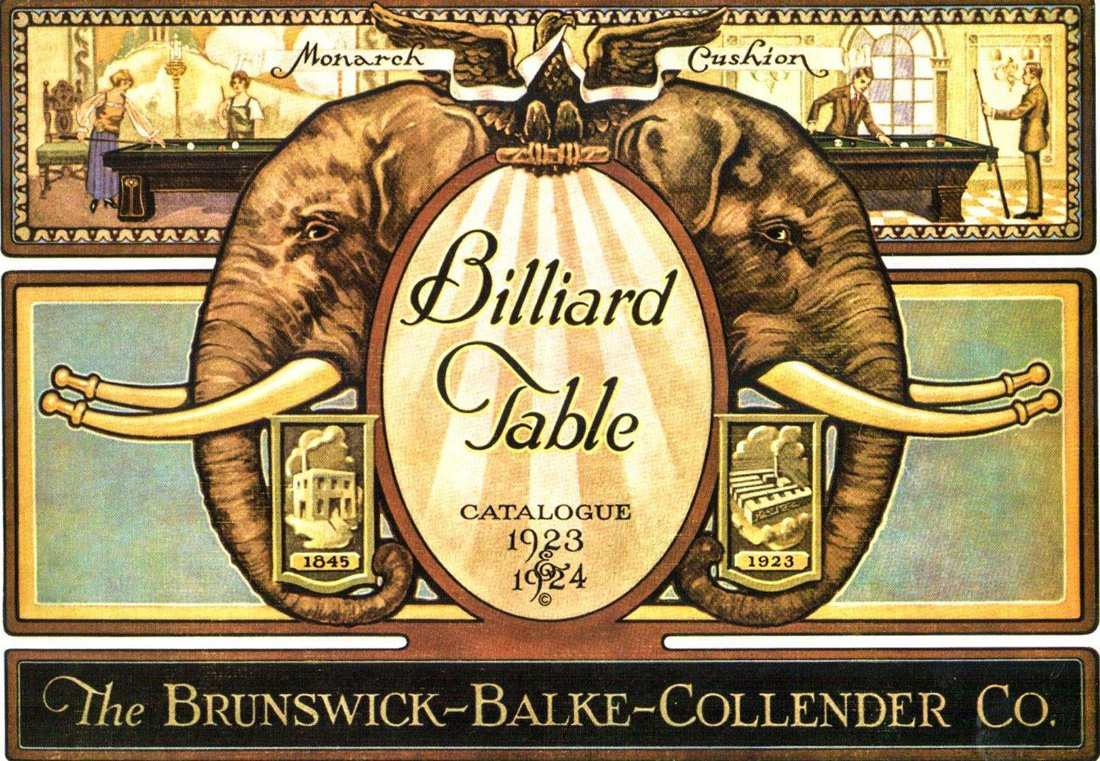 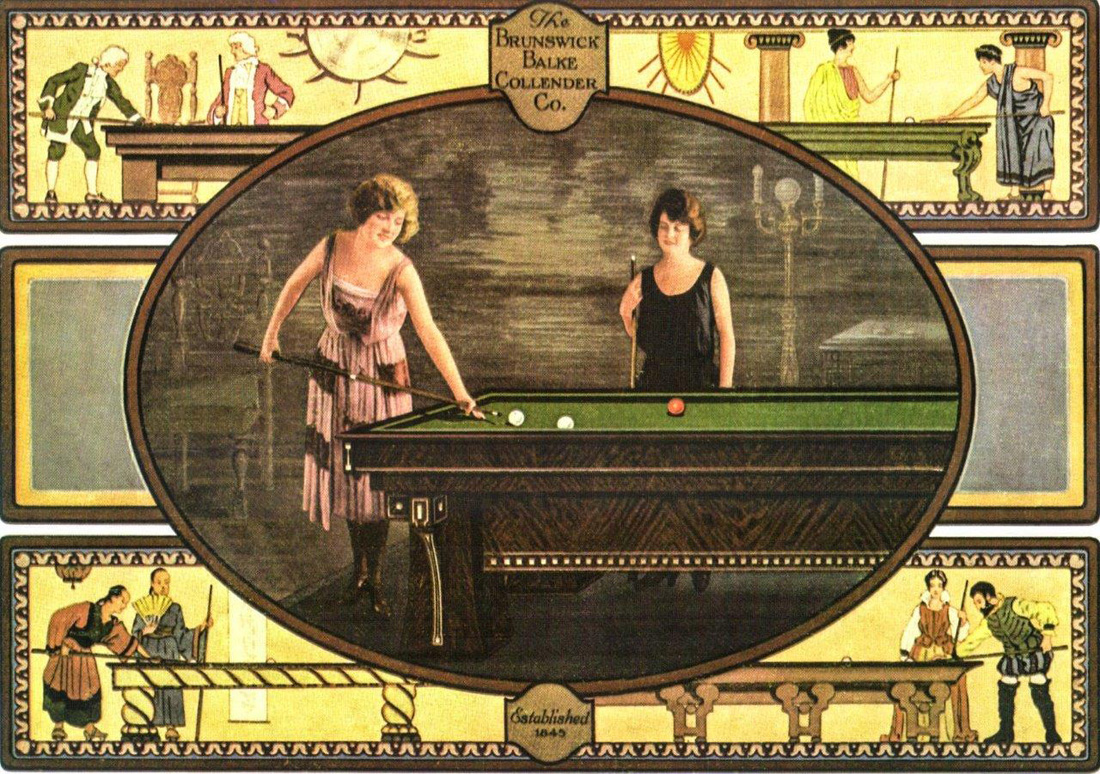 From the early 1910’s and beyond the manufacturers and marketers of billiard tables were never really successful in completely stamping out the term "pool". Today, if you are in Europe, you will find that any table with or without pockets is still referred to as a billiard table. In the U.S. a pool table is quite often thought of as a table with pockets and a pocket-less table is either a billiard table or a carom table. For this website, I may find myself using the terms interchangeably. When it comes to a cue I always think of it as a billiard cue and not a pool cue. Don't ask me why.

In closing, AS THE LATE PAUL HARVEY ALWAYS SAID, “AND NOW YOU KNOW THE REST OF THE STORY!” “IT IS CALLED A BILLIARD TABLE AND NOT A POOL TABLE”.