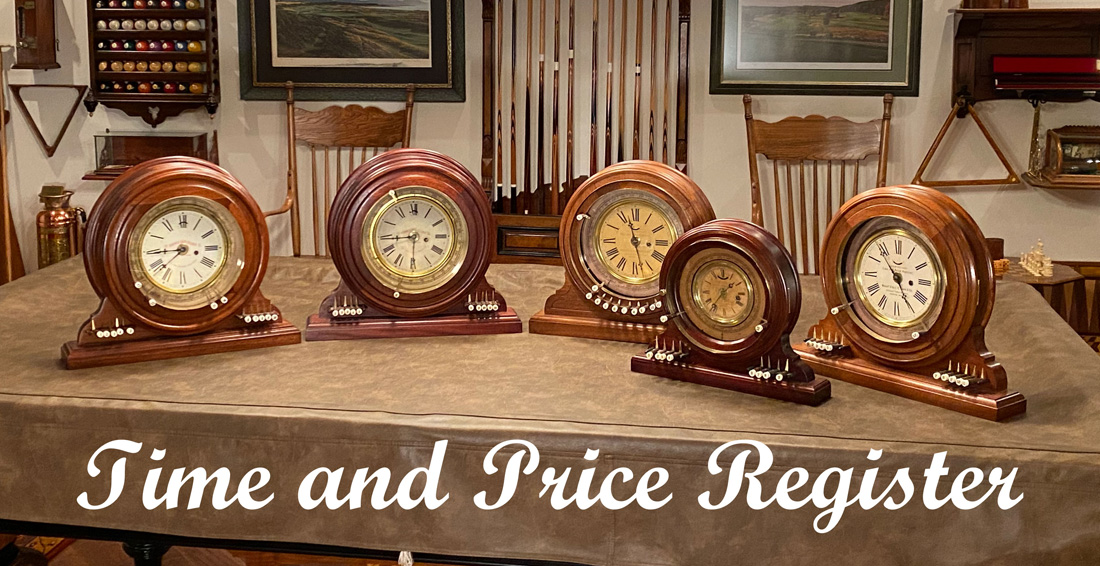 Billiards grew in the late 1800’s from a game for the wealthy in their plush surroundings or in saloons to a game embraced by the masses. Billiard parlors were springing up everywhere in small towns with a few tables to massive billiard parlors like that seen below. 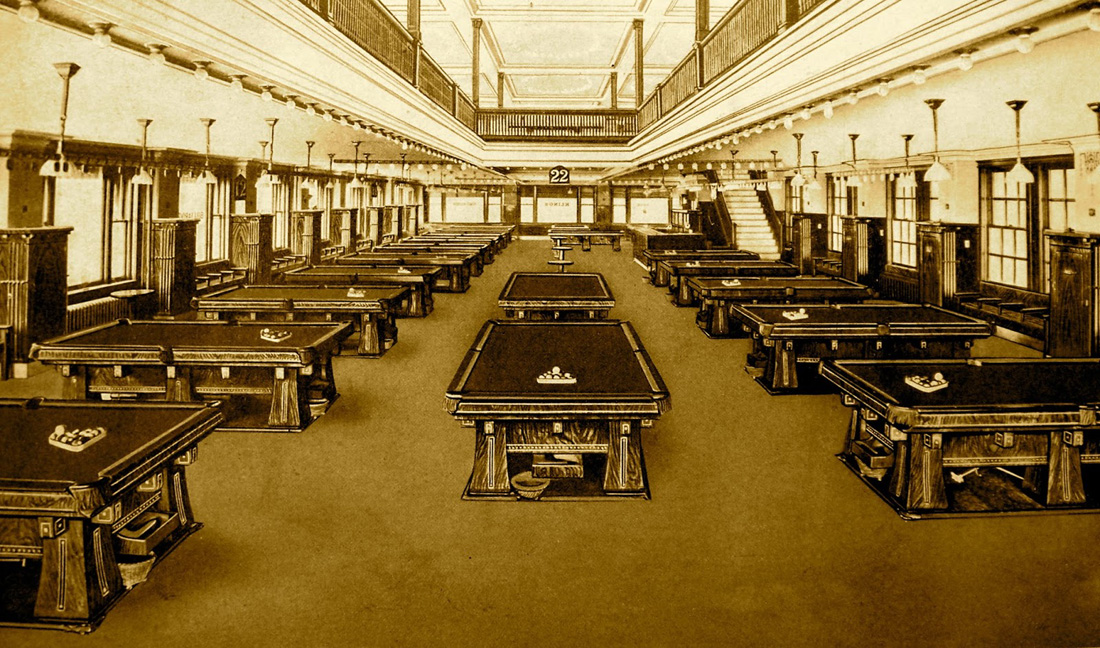 Billiards was a major economic boom first for the table makers like Brunswick but then also for the billiard parlors. Small two or three table establishments like those in a bar often charged by the game, referred to as a rack. This was not a feasible way to charge for a game of pool in a large establishment like the billiard parlor seen above. These establishments charged base on the time you occupied a table. But how could you keep track of this time on a table. Thus, the creation of what is called a “Time and Price Register” like the one pictured below. 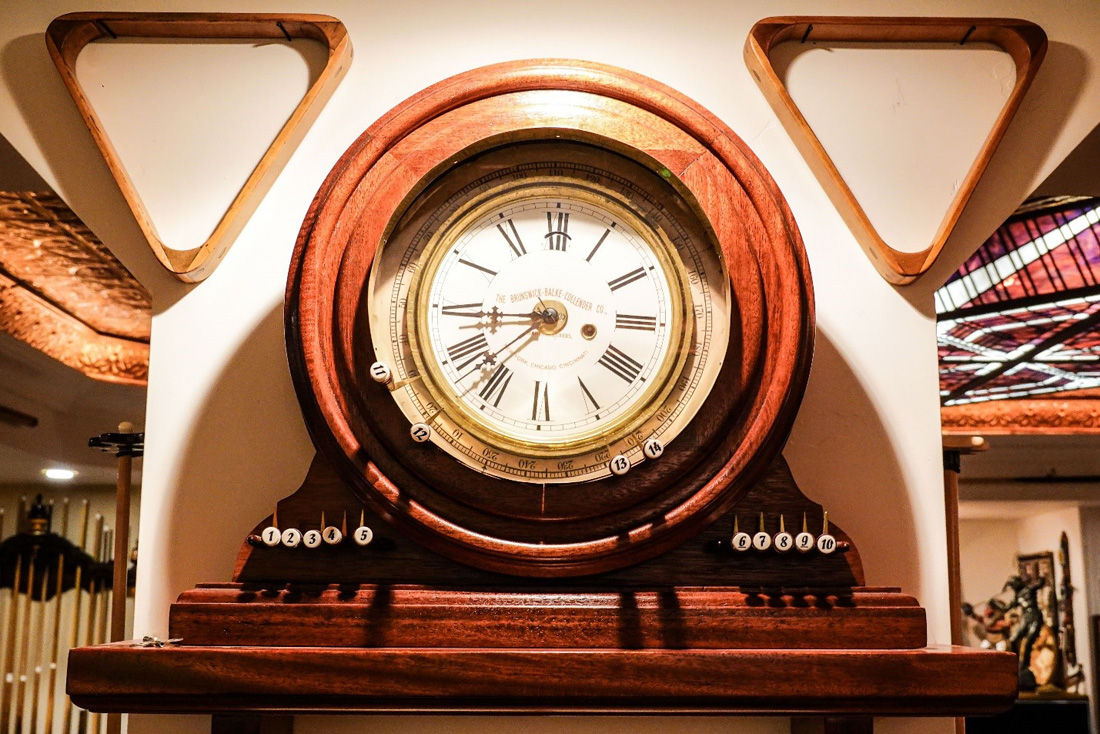 This clock has ivory scrimshawed indicators mounted at the base of the clock while  other style of clocks the indicator is on a brass ring encircling the clock. Each of these indicators is associated with a given table in the billiard parlor. As part of the clock mechanism there is an outer ring seen on the clock below. While the clock hands are moving clockwise it has an outer ring suspended on wires that is moving counter clockwise. This outer ring has an established price per hour and the billiard parlor would be sold rings of different amounts per hour, so they could set the price for each of their Time and Price Registers. Notice there is an arrow on that outer ring that indicated a starting point. 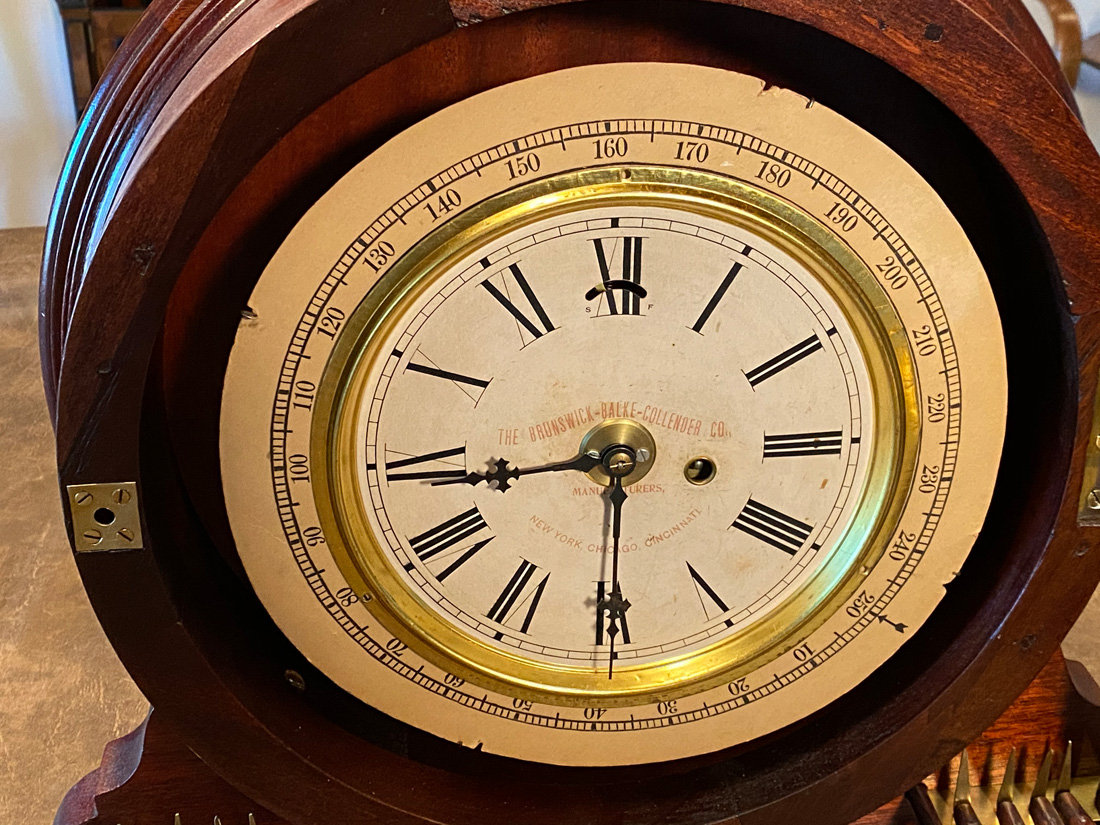 When a group of players comes into the billiard parlor at 7:30 they are assigned to a table say #6. Note, on the clock below the proprietor of the establishment has taken the ivory and ebony indicator #6 from the brass holder at the base of the clock, and he has placed that pointer at the start arrow on the outer ring. 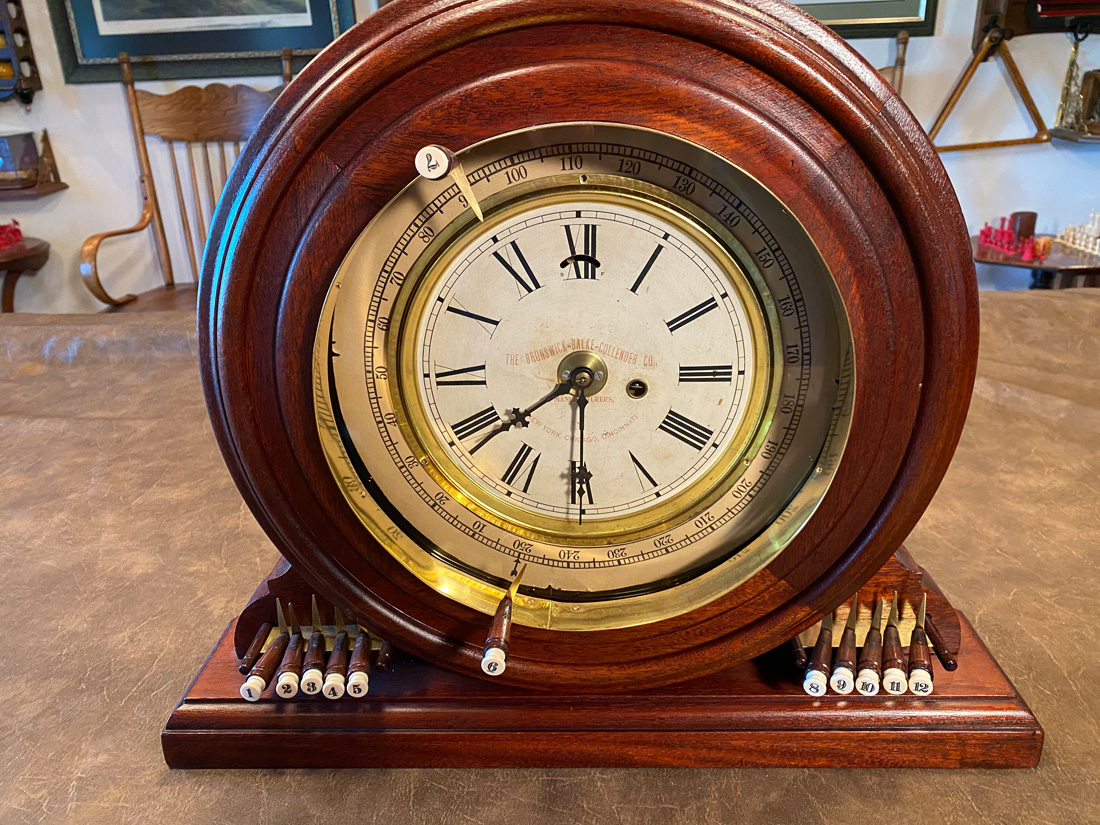 An hour later at 8:30 the game is over and the players are leaving. They come to the proprietor, and he looks at his clock seen below and he says you owe me $.50. The outer ring on this clock is set at $.50 per hour. Notice the outer ring moved counter clockwise and is pointing at $.50. Had the player played for three hours the outer ring would have moved to $1.50. As you can see you can have multiple indicators on this outer ring at the same time, and each one was place on the ring at the start point of the outer ring. 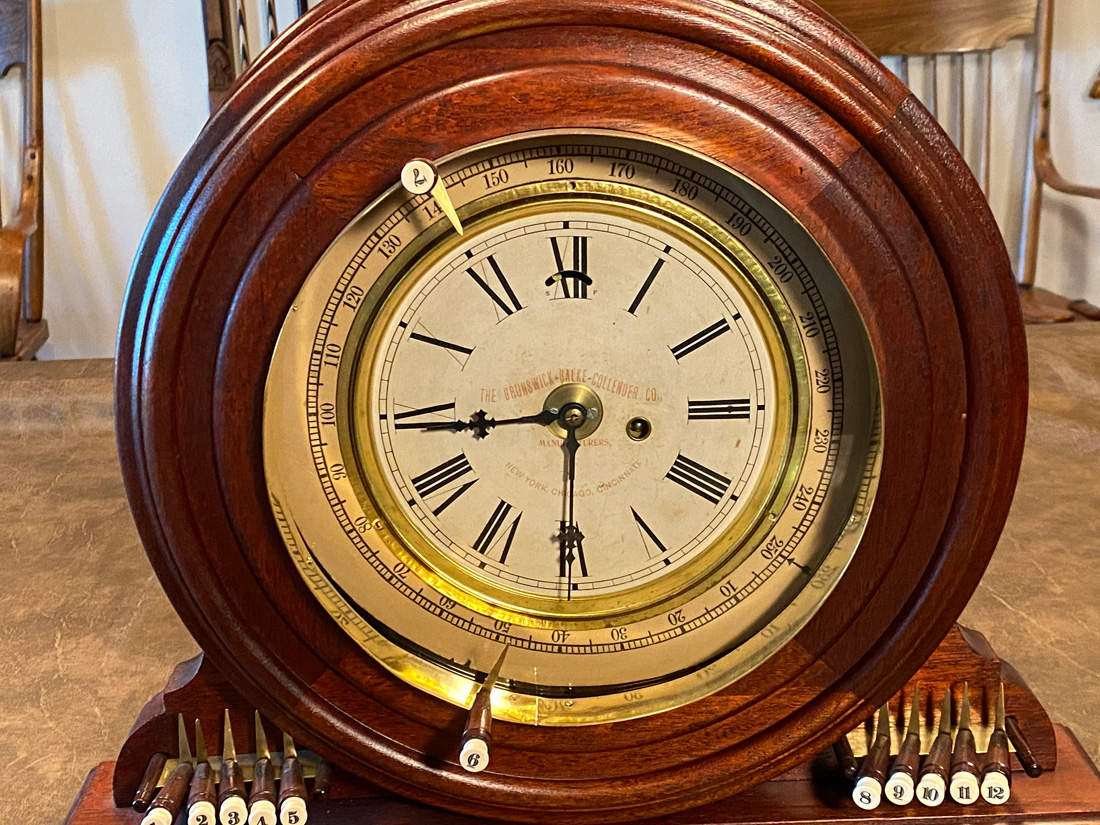 The back of my J. E. Came “Time and Price Registers” still have their original operating instruction stuck on the back of the clock as you can see below. 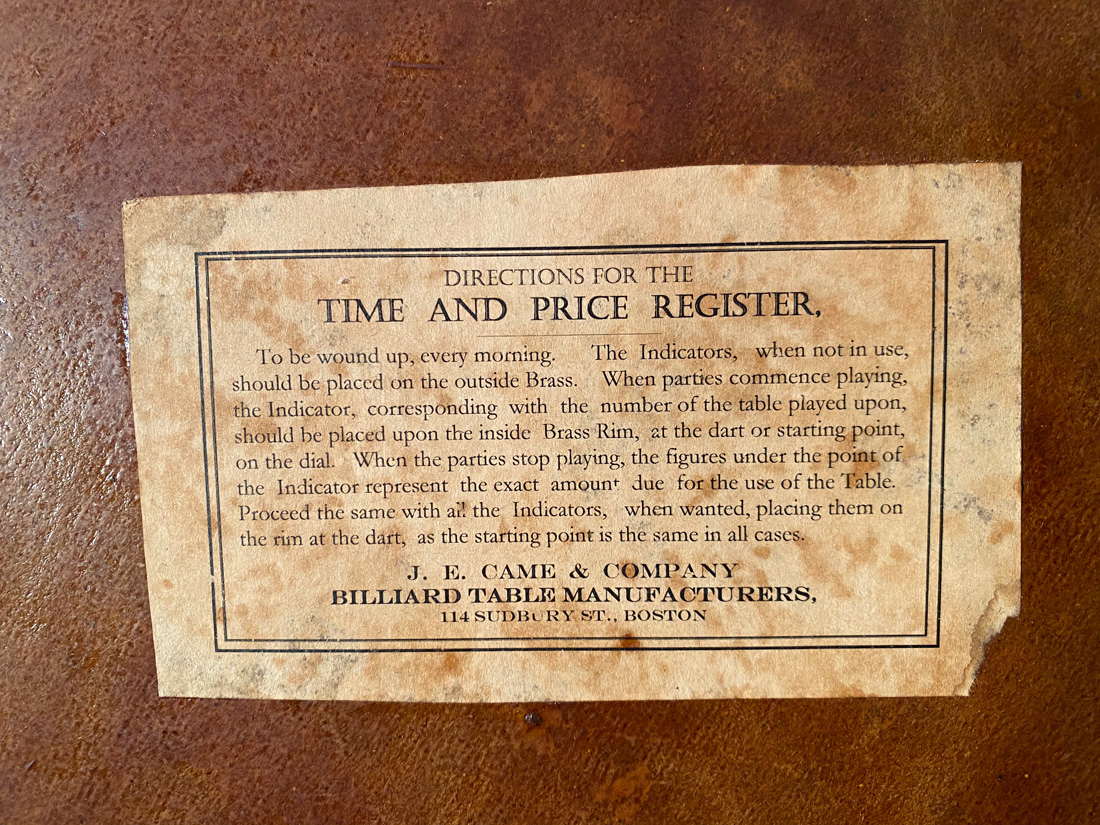 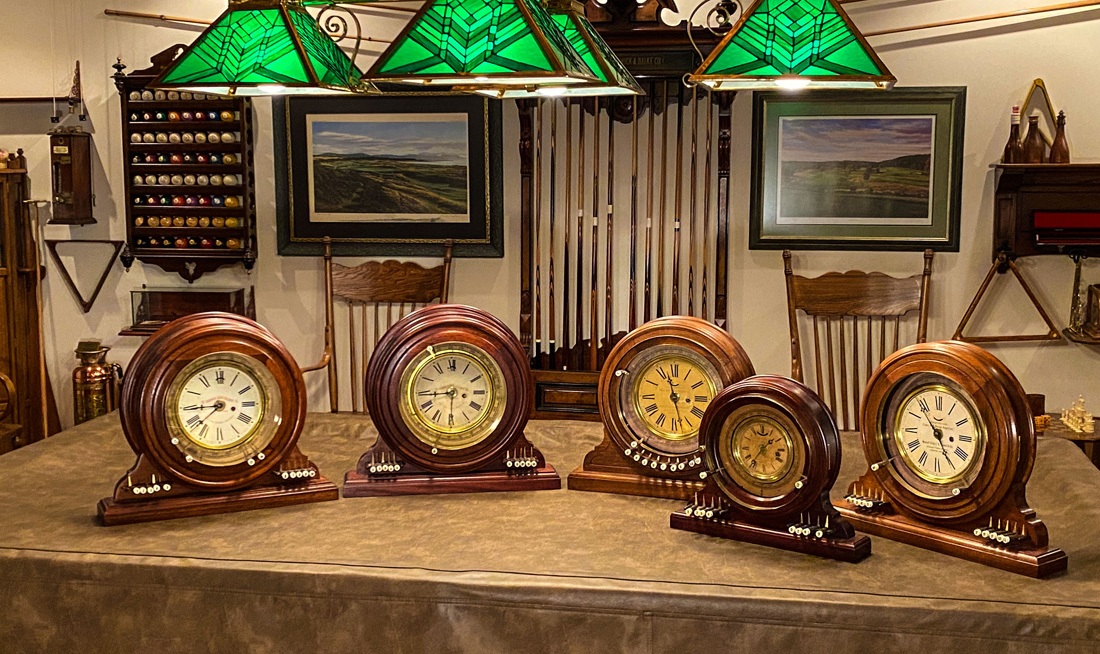 I have 5 “Time and Price Registers”. The two on the left (pictured above) are Brunswick-Balke-Collender Co. and the three on the right are J.E. Came. The rarest of the group is the smaller J.E. Came clock (front and center on the right) and it is the only one that I know to exist. The clock movements on all the clocks are from the same maker. The J. E. Came clocks are narrower from front to back then the Brunswick. Notice the one J.E. Came clock (third from the right) does not have the brass holders at the base to hold the indicators when not in use. It has a second outer ring on the clock which hold the indicators when not in use and all of these ivory scrimshawed indicator brass points are much shorter in length.